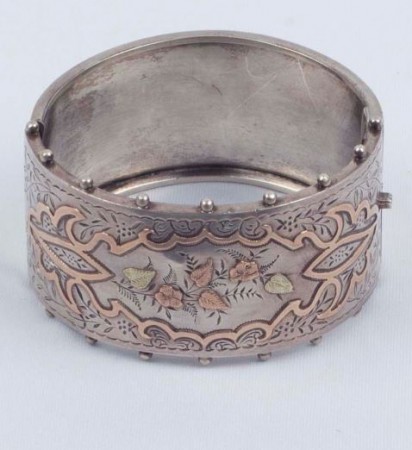 Behind The Scenes At North Otago Museum - Miss Spedding's bracelet

This beautiful sterling silver bracelet with gold detailing was presented to Miss Selina Amy Spedding in 1884.

Selina was born around 1859 in Victoria, Australia and her family moved to Dunedin when she was 2 years old.

Female teachers were required to resign upon marriage during this era. Miss Spedding married Frank Kemshed on the 3rd of January 1887. Perhaps unsurprisingly this time round there were no more silver bracelets presented. Instead she received a “handsome time-piece” on behalf of the teachers and pupils.

On the 1893 suffrage petition Selina has listed her occupation as domestic duties. Her hands would have been full at that time with a 5 year old and a 3 year old. The family later moved from Oamaru to Whanganui and then to Dunedin. Ultimately the couple had four children together. Between 1904 and 1906 she, now Mrs Kemshed, is listed as a teacher at Broad Bay School, Dunedin.

She remarried widower Michael Nyhon in 1907. Michael died in 1946 and Selina passed away in 1951 at the age of 92. The bracelet was donated to the North Otago Museum by one of her grandchildren.