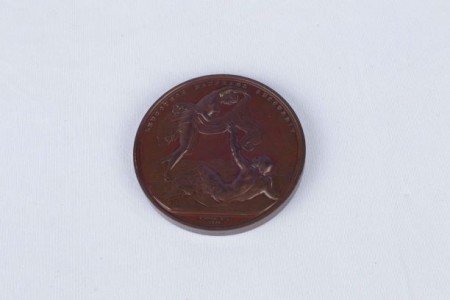 Behind The Scenes At North Otago Museum- Donald McDonald

(The text below was written by Kathleen Stringer, former North Otago Museum Curator, in 2005)

Driving around the back roads of North Otago there are many fine houses, large homes made of stone or wood that recall wealth or perhaps an interesting former owner. But tucked away in a corner of a Totara paddock is a small hut, barely a house, made from flattened metal drums. This was once the home of a hero of the seas - Captain Donald McDonald.

Donald was born in 1853 in Stornaway, Isle of Lewis in the Outer Hebrides, off the coast of Scotland. Although his father was a schoolteacher, Donald followed the occupation most common for these hardy folk – that of a sailor.

When he was 17 his parents died. He took on the role of parent for his seven siblings. Once the children could support themselves he became a First Mate – which meant longer journeys away from home.

Although an expert seaman, Donald McDonald was besieged by mishaps. Nine times he was on ships that wrecked, two of those times he was the sole survivor.

In 1888 Donald and his brother John set sail on the Henry James. Although largely a coal scuttle (carrying coal from Australia to San Francisco) the ship also had 11 passengers on board.

On 11 April the ship struck an uncharted reef. "She began to labour heavily. There was only one thing for it now, to abandon ship."

A lifeboat was used to row to Palmyra Island 50 miles away. "There were plenty of birds, but we could find no water on the island. We were in a perilous plight, marooned on an uncharted island in Mid Pacific far out of the regular course of steamers without food, clothes or firearms!"

The next morning the Captain ordered Donald to set sail for Samoa to get aid. Donald was not convinced this plan would be successful. However the following day he saw a little girl eating a raw bird and his heart went out to her. Donald took a ring off his finger and gave it to the girl with the promise that he would return to rescue them. (Eight years later he was met by the young girl who returned the ring with grateful thanks. They became constant pen pals.)

"I felt very alone and helpless." He spent his last night in spiritual retreat.

With one German, an American and two Irishmen, Donald sailed across the Equator. "The sea ran in battalions." Eventually their small supply of coconuts ran out and they were forced to eat their boots. One sailor was so thirsty he cut his finger and drank his own blood. After 18 days and 1630 miles they reached Samoa. Help was sent to Palmyra, but 13 days before Donald and his crew reached Samoa, the shipwrecked folk had been rescued by a passing steamer.

Donald returned home to recover and made little mention of his act of bravery. He was, however, awarded the Lloyds life saving medal. This medal was presented to Waitaki Boys High School, who donated it to the Museum.

While many noble comments were made about Donald McDonald perhaps the best was written to him by his brother Alex. "Your undertaking is indeed unsurpassed in the annals of maritime history; it is indeed almost a romance as it is termed in some of the papers. You maintained a glorious and noble reputation not for yourself alone but for all who hail from the same country."

Donald McDonald’s time at sea played on his health and in 1902 he decided to move to Totara to be near to his sister who had married Donald McIvor.