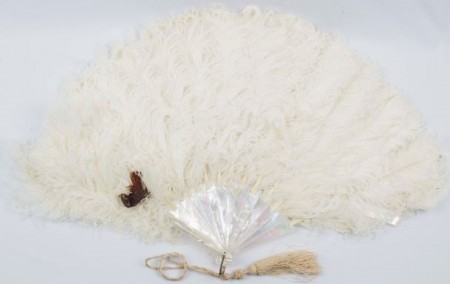 Behind The Scenes At North Otago Museum – Agnes Reid

This beautiful Victorian era fan once belonged to Mrs Agnes Reid née Humphries (1838-1924) of Elderslie. Agnes Reid was the wife of John Reid.

The fan is made from mother of pearl shell, ostrich feathers and it features a taxidermied hummingbird as a decoration. It dates from around 1890. This type of fan was fashionable and a fan featuring a hummingbird was pictured with the Princess of Wales in 1871.

Agnes married John in Melbourne in 1855 when Agnes was about 17 years old. In 1863 Agnes and John left Australia and moved to Otago. John purchased land in North Otago in 1865 and once the land was developed in to the Elderslie Estate the family permanently moved there in 1874. John Reid did well in farming and family photos show the Reid’s enjoyed life in opulent surroundings.

Agnes and John had 12 children together, 5 daughters and 7 sons who you can see in this family photo. Our collections online site features many Reid family photos. This one even shows Agnes holding the fan.

Agnes died in 1924. The fan was later gifted to the Oamaru Pioneer Gallery by one of her daughters-in-law, Mrs Evelyn Reid, and by one of Agnes’s granddaughters, Mrs Joan Douglas, in 1959. Cloaks and hats from the Reid family were also donated at this time.

The fan is currently receiving conservation treatment at Otago Museum to ensure it is stable for display next year.